Chris Jones has created a python wrapper for my picoLCD SDK which is available
for download here. You can read more about this at his blog and watch a nice video
of his python application and picoLCD in action here.

Savage: The Battle For Newerth: Free and Improved.

by Nicu Pavel on 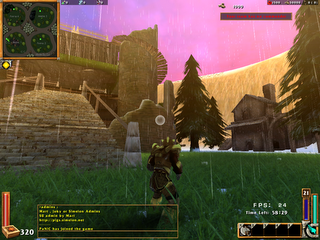 While browsing the linux games sites I noticed that Savage: The Battle For Newerth from www.s2games.com it's free and recently received a complete overhaul from the
community put together as Savage: Full Enhancement available to download from http://www.notforidiots.com/SFE/ . The enhancements are pretty impressive and include a modified 3D engine which adds raytraced weather effects, real-time commander mini-map drawing etc. The game is multiplayer,looks good, has a lot and fast action and you get addicted pretty fast. There are lots of servers on the internet so it shouldn't be a problem to get into action fast.

You can play as a commander which let's you give commands and control the game as in a RTS or as a warrior if you like FPS games. Of course I choose FPS mode since it's not easy to be a commander...


Note:
I installed the game on Ubuntu 7.04 and noticed choppy and distorted sound under ALSA. The game doesn't seem to accept SDL_AUDIODRIVER env variable (which works for other games) and modifying sound_output variable didn't make a difference. My solution was to install OSS (recently open sourced) from www.opensound.com and blacklist alsa devices to make oss load ok.
As usual OSS gives better sound and latency versus ALSA (not to mention the imux device which is very usefull for streaming), but they are a little too late with opensourcing their driver and because of that GStreamer used in
Ubuntu desktop and other application won't work with the latest OSS release because the mixer API changed and there is no release with the latest OSS API for
osssink gstreamer plugin.
If you intend to compile OSS from source if might need to modify setup/srcconf.c and add -fno-stack-protector to CFLAGS around lines 652 and 657.

Welcome to the new layout of my projects page, although not everything has been finished most of my current work is now public.
The page is very, very ... lynx/links friendly so browse away.
On the rant section I intend to post my views on interesting linux news from the web.
Cya soon.

Note: There are still some minor problems with my template for blogger.com.